AUGUST 2019
Le PeTiT CiRqUe performing at The Festival of Arts!!

JULY 2017
Malibu Wedding
On July 1st Carrie had the pleasure of photographing Misa and Paul's incredible wedding in the beautiful mountains of Malibu!  The wedding took place at an adorable private home with about 30 guests that attended.
Between the mountain range, vinyards and variety of trees there were endless options for Carrie to take magical photographs!  The gorgeous Japanese bride provided parasols so guests could keep cool throughout the afternoon.  As you can see in the image below the sun was setting over the mountain range and Carrie put her creative energy into gear!  She composed a silhouette from the light of the sun through the parasol and matching it along the mountain range to create this romantic image.

APRIL 2017
Desert Tortoise sighting in the Mojave Desert
Carrie, Mama and her friend Brittany took an impulse adventure into the Mojave Desert in search for some gold diggers!  Not only did they successfully find gold diggers and learn how to pan for it, they came across a Desert Tortoise which is incredibly hard to find!!
The Desert Tortoise eats cactus, grasses and wildflowers from March to June!  They store fat and water in their bodies and dig holes to live during hot summers.  They come out again in the autumn when the weather is cooler!!

FEBRUARY 2017
Check out Carrie's Panoramic Photography on Etsy
Carrie's photographs are printed on a High Quality Luster Paper and mounted to 1/4" solid black sturdy poster board. There is also a protective sealer on the photograph to prevent any damage. On the back there is a 1/2 " poster board where you will find double sided Gorilla tape. Remove the clear seal and apply the piece directly on the wall. Artwork will be floating off the wall at about an inch to give it a professional look!

Below is an informative video on "how to" hang your Panoramic Photo when it arrives!!
Also please check out Carrie's Etsy shop at zellerphotoart

JANUARY 2017
Kicking off 2017 with Tattoo Photography
Carrie kicked off her 2017 Newsletter photographing people with Tattoos!!!  Whether it is a man perfecting his trade, a girl honoring her family or a yoga instructor taking the bull by the horns, Carrie portrayed their tattoo journey through the lens of her camera!
Below you can view a few photographs that Carrie took during Micheal Hermans Photo Shoot, a talented glass blower that is based in Laguna Beach, Ca.  To visit more of Carries Tattoo Photography please visit the PASSION section of her website!  Happy New Year!!  Make it happen in 2017!

Panoramic Photography is also known as wide format photography!  The term Panorama literally means "all sight" in Greek and it first originated from painters that wanted to capture a wide view of a landscape, not just a certain part of it.  In Panoramic Photography the field of view is similar to what the human eye is accustomed to seeing.  When we look at a normal photo we know that it is like looking at the world through a window, and we are only seeing part of what we would see if we were there.

I have started to include at least one panoramic photo in each photo shoot that I do so people can really relate to the environment they were in at the time.  The panoramic photo below Carrie took in San Francisco on Arlington Street where her Aunt Snookie lives!!  Snookies house is the one with the beautiful red bougainvillea in front of it!!

Carrie photographed fitness model Aubrey Surovik of simplyaubrey.com along with 12 other models for The 5 minute Shaper Pro ab machine coming out in October 2016!!  Carrie was on set as they were filming the informercial for the Shaper Pro and her job was to document all fitness models on and off the machine, all people involved from the director to the camera man and the overall action happening throughout the day!!  Check out the photos below!

DECEMBER 2015
Carrie Takes The Kimball Family Back In Time

If there is one consistent aspect of Carrie's career, it's her creative approach to every shoot she does. As Carrie likes to say "no two shoots are ever alike."  In late 2015, Carrie took a traditional "family shoot" and elevated it to a timeless work of art by recreating a 1920's vintage theme with the Kimball family.  Finding a perfect location, directing the family to be in character and composing the images in an effective way successfully took the Kimball family back in time.

Carrie recently was the featured artist at Moulton Elementary School at the "Reflections Arts Contest" where she presented to the students her artwork and her journey of becoming an artist.  It was a great event that the students explored their creative side through photography, literature and fine arts as the theme of the the project was "Let Your Imagination Fly!"  Check out the photos below of Carrie presenting her art to the students and working with them to help begin their journey of expressing themselves through art.  As Carrie said, "Who better to inspire than a group of kids!!"

Carrie photographed artist Allison Keefe who is of the seven artist involved in The Sawdust Art Festival ad campaign!  Carrie and Allison chased down one of the 22 buses and had a chance to grab a quick photo infront of the bus!!!  They couldn't be more excited about being involved with this campaign!  Buses will run until August 30th so keep a look out!!

Carrie, who has been an exhibitor at Sawdust Art Festival for seven years, was chosen to photograph artists for the festival's 2015 ad campaign.  She photographed seven artists across various mediums of art.  The photos can be seen on all of the Sawdust Art Festival materials, but Carrie is getting the biggest rush this summer seeing her photos on Orange County buses.  Check out the photos of the campaign below!! 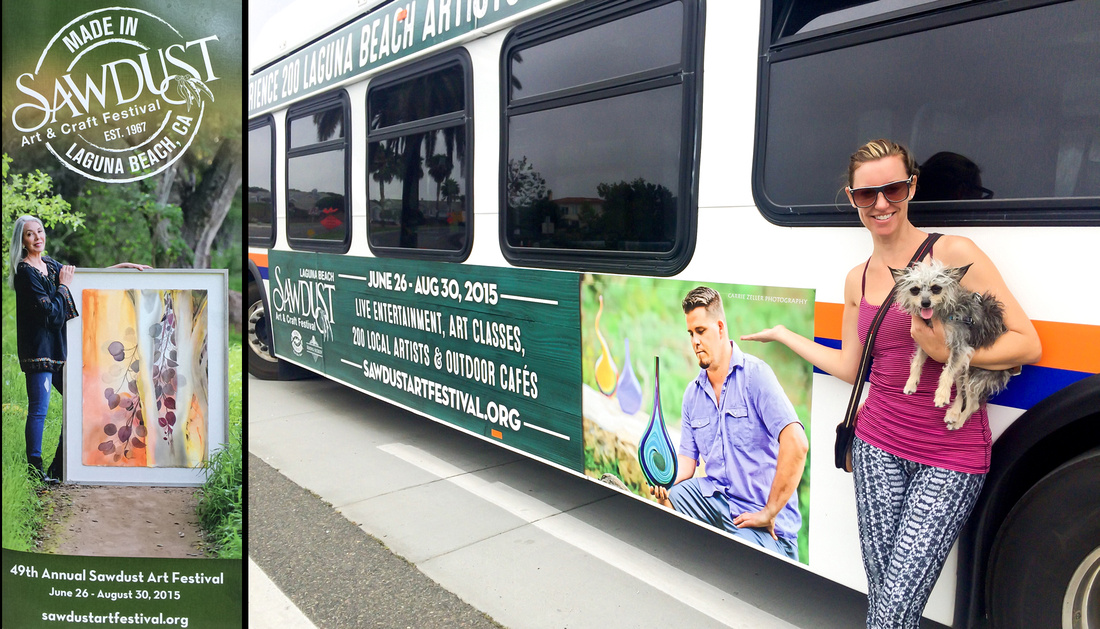 Carrie was recently interviewed for a feature on photography tips for Laguna Beach Magazine.  She contributed her knowledge on portrait photography to the article.  Be sure to stop by a news stand and grab a copy.

MAY 2015
Bali Trip to Capture the Essence of Yoga

An avid Yogi, Carrie recently traveled to Bali on a Yoga retreat where she she expanded her understanding of Yoga for her own practice.  She also did numerous Yoga shoots capturing other students of Yoga in practice.  Check out some of the images from Bali in the Yoga Gallery of this website. 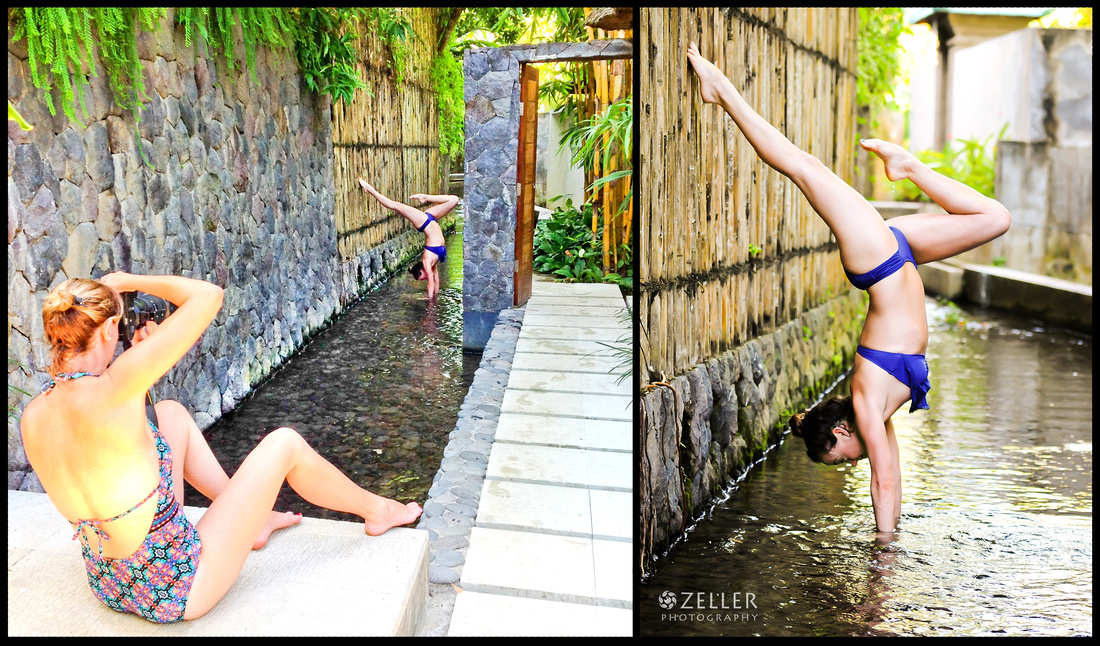 Carrie was hired by filmmakers Chris Fetchko and Marina Donahue to cover the premiere of their upcoming movie 'All In Time."  The film had its World  Premiere at the Newport Beach Film Festival where the filmmakers and cast celebrated.  Lynn Cohen, star of Sex & The City and The Hunger Games was is attendance as well as the rest of the film's cast.  Check out some of the photos below as well as the film's website at www.allintimefilm.com where you can watch a trailer of the film.

Gayle Anderson from KTLA TV in Los Angeles did a feature on Carrie and her involvement in her seventh Sawdust Art Festival.  The news feature highlighted Carrie's Photo and Glass artwork and was shot in her booth at the festival.  Below are photos from the interview and of Carrie's booth at Sawdust.  Be sure to stop by her booth this summer!